Two of the funniest entertainers on today’s music scene. – The Boston Globe

Christine Lavin and Don White are a great team. It’s not easy to find artists who can do a set of really articulate, really funny material like this…  I salute you both.” – Anne Saunders, Artistic Director, Falcon Ridge Folk Festival

“As you watch Christine and Don, you tend to feel like you’re making a friend, rather than admiring some distant star.” – Scott Alarik 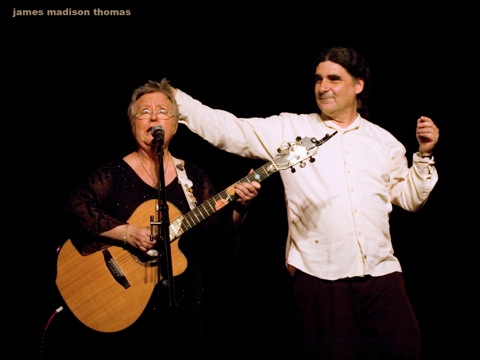 On The Funny Side Of The Street: A Night of Brighter Laughter

Leave your worries at the doorstep and join Christine Lavin and Don White as they present a night of comedy unlike any other, The Funny Side of the Street: A Night of Brighter Laughter.

Since 2008 these two veteran performers have brought their unique brand of clean and hilarious musical comedy to audiences across the US proving night after night that comedy can be smart, friendly, and breathtakingly funny without being vulgar or pejorative. This is a show for anyone who wants to laugh, whether it’s a group of friends or a family gathering, and feel good on their way out of the venue.

“Christine Lavin and Don White are a great team. It’s not easy to find artists who can do a set of really articulate, really funny material like this complete with the tween banter. I know, I look for it every year, and there’s not much of it out there that is not just plain offensive. To have that as well as the versatility to do a fine set on so many other topics is a rare thing. I salute you both, hope to come see you again in the near future.” – Anne Saunders, Artistic Director, Falcon Ridge Folk Festival

Since emerging from the NYC singer/songwriter scene in the late 1980s, (along with Suzanne Vega, Shawn Colvin, John Gorka, etc), Lavin quickly established herself as an entertaining tour de force. Quick on her feet, witty, insightful, engaging, she remains one of the most popular and respected performers in the genre.

Christine has also been at the forefront of finding and promoting extraordinary new talent. She founded a songwriter’s retreat on Martha’s Vineyard, the On a Winter’s (and Summer’s) Night tours), The Four Bitchin’ Babes, Laugh tracks among many other projects, in the process releasing more than 10 compilations CDs, as well as more than 20 of her own.

Her co-conspirator, Don White, is the latest artist that Christine has championed. “He’s such an original; I call him sometimes a ‘blue collar intellectual,’” Lavin says. “Don has extremely high standards when it comes to what he does onstage. And he hits a grand slam every time. The first time we worked together he opened for me and it’s the only time in my entire career that I opened with a ballad because he was so funny, the audience was so laughed out.”

A product of the rich Boston Arts Scene of the 90s Don developed his songwriter/performer chops in the same Club Passim/ Olde Vienna Kaffehaus scene that produced Dar Williams, Martin Sexton, Lori McKenna and Vance Gilbert. He was also a regular comedian at the legendary Catch a Rising Star in Harvard Square in Cambridge, Mass honing his comedic skills alongside Jimmy Tingle, David Cross, Wendy Leibman and a host of other cutting edge comics of the time. These experiences along with his immersion in the Boston spoken word scene that produced the National Poetry Slam Championship Team in 1992 all combined to make him one of the few performers who brings a comic’s wit, and a poet’s heart to his songs and stories.

“It doesn’t sound like a folk concert, it sounds like a comedy concert,” says White of his laughter-inducing co-bills with Lavin. “We rehearse and we rehearse and then inevitably, she’ll throw something at me that I have no idea about, with a mischievous grin that lets me know she’s been thinking about it all afternoon. Just to see what will happen. And she’s taught me to do the same.”

Audiences are looking for something fun, fresh, smart, and intriguing as well as thoughtful: On the Funny Side of the Street does just that. 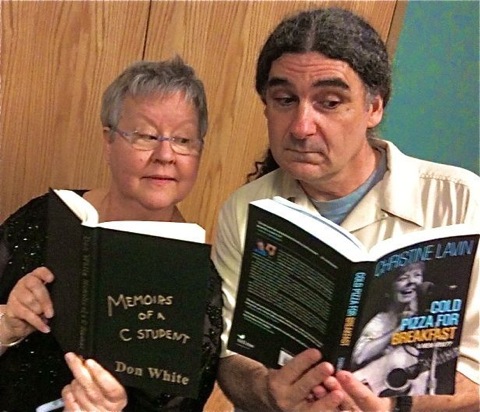 I have been trying to find a way to explain just how much fun the audience has at these co-bills with Christine Lavin. I have never been involved in anything like it in 20 years in the music business. People are justifiably skeptical when I tell them that, except for a few strategically placed serious songs, the audience is howling for over two hours with the kind of laughter that makes you think that some of them might be peeing themselves just a little.

My roots as a performer are in stand-up comedy. To me, comedy is high art. A well-crafted humor-based performance sounds like a symphony to me. The timing, the pace, the surprises, the softer moments, the big swells of sound, and the overall continuity all combine to move me in ways that are very similar to the ways that I am moved by an orchestra piece.

I love and respect the art form so deeply that I felt a bit confined in the comedy club scene because frequently the audiences there were accustomed to humor that was less thoughtful and more jocular.
When I brought what I learned from stand up with me to the music world I discovered a community where creative freedom could thrive.

Christine Lavin understands the unlimited potential that smart humor can bring to an audience’s experience as well as anyone I have ever known. People love to laugh. Christine gives them more than they can handle. She gets them laughing and keeps them laughing until they look like they can’t take anymore. And she always does this without compromising the intelligence of her work. She never goes for the cheap laugh. Her humor is always part of a bigger idea that the audience will be thinking more deeply about after the laughter is gone.

I’ll never forget the first time I worked with Don White.  It was 1995, in a small town near Boston.  I had heard through the grapevine he was an up-and comer, but when I saw him work in front of an audience I knew that he had arrived.

A year later I produced a two-day event at The Bottom Line in New York City that showcased funny songwriters called “Laugh Tracks.”  I invited the funniest songwriters I know, and Don White was one of them.  So was Andy Breckman.  That name might ring a bell — he went on to create the TV show “Monk,” so Don was in good company.  Also on the bill were Patty Larkin, The Four Bitchin’ Babes, Dave Van Ronk, Tom Paxton, Vance Gilbert, David Buskin, and Rob Carlson — David and Rob actually met at “Laugh Tracks,” and went on, adding George Wurzbach to the mix, the form the trio “Modern Man” which is drawing audiences all over the US and Canada, and recording some of the funniest albums I have ever heard.

Don’s song “Rascal” on “Laugh Tracks” became the breakout ‘hit’ of the two-CD compilation.  In the Detroit area a local rock radio station added it to their yearly compilation, and it became the breakout hit for that project, too.  I can’t tell you how proud and happy it made me to play even a small part in introducing Don White to new audiences.

When Don and I work together, it’s a very powerful one-two punch that leaves audiences gasping for air (from all the laughter), and reaching for tissues from the unexpected serious songs.  After reading just two pages of Don’s book, “Memoirs Of A C Student,” I knew I had to write a book of my own.  I’ve written nine chapters so far, have an agent who is shopping it, and I plan to have it out there in 2010. when I’ll be celebrating my 25th year as a performer.  Who knew that this young guy I met way back last century was going to inspire me to write a book?

It’s hard to describe what it is that Don does onstage, because there simply isn’t anyone out there like him.  I’m a brave performer to share the bill with someone who knocks audiences out the way he does.  But I’ve discovered if audiences know me and don’t know him — they become instant fans of his.  If they know him and don’t know me, the same thing seems to happen for me.  Everybody wins.  And I can’t wait for the day onstage when I can say, “If you can only buy one book at this concert tonight, please buy mine.  But if you can buy two books, please buy two of mine.”